We do things differently from the other stores.  The first thing that you may notice when entering our store is that we don't stock very many bikes.  There's a number of reasons why, but mainly because we are mostly a service-oriented shop.  Most shops have a huge showroom and a tiny workshop.  We prefer a larger workshop.  Also, when you look at the number of brands we sell, it would be impossible to stock all the resulting models (482) in all of there colors and sizes. So, we prefer personalizing your new bike to YOU, rather than steering you toward a bike that we happen to have in stock.

You have a month to fall in love with your new bike! 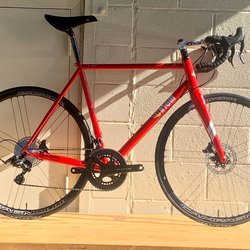 Cinelli Nemo Tig Disc Campagnolo Chorus 12s Red 56cm
$4,999.99 $5,999.99 17% Off
This beautiful machine is built up and ready for you! We can customize it any way you choose. The Nemo TIG is Cinelli’s latest Made in Italy high-performance steel road frame. It looks and rides the way in which the legendary Supercorsa – the world’s longest running production steel frame – might have looked had it been designed for racing today rather than in the 1950s. The first prototypes of this frame were born according to the specifications of a recently retired Italian professional rider working at Cinelli who, seduced by the Columbus tubing being manufactured on the factory floor attached to the Cinelli offices, demanded that Cinelli produce a pure racing steel frame that took full advantage of the latest advances in high tech steel tubing manufacturing. Accordingly the Nemo has been designed for riders used to riding high-end carbon fiber racing frames, unwilling to sacrifice “race feeling”, but looking for something incomparably pleasurable to ride in the way only a steel frame can be. It employs custom-shaped Columbus Spirit triple-butted tubes (the seat stays, for example, are the identical shape of those found on the original 1981 Cinelli Laser road model), with a highly contemporary 44mm mega-oversized downtube, conical CNC’d head tube and Columbus’ latest Futura straight blade monocoque carbon fiber fork. In the spirit of its older cousin, the Supercorsa, the Nemo is available not only made-to-measure, but also in 60 different color options. 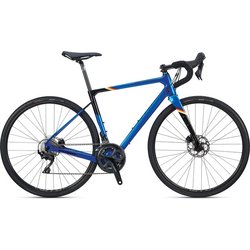 Jamis Renegade Expert - 2019
$2,136.75 - $2,849.00 $2,849.00 Up to 25% Off
The Renegade is ready for any adventure, no matter which Renegade you ride. The long and tall adventure geometry is designed specifically to ride comfortably all day on the road or in harsh conditions off-road. With disc brakes and the ability to mount multiple tire sizes, these bikes are ready to go just about anywhere. All you need is the desire to push, pedal, and explore. Elevate your adventures with the reduced weight and additional compliance of the carbon fiber Renegade Expert. The frame features an EVO386 bottom bracket shell for maximum power transfer, 3 water bottle mounts (with additional mounting options on the fork), and the added stiffness of 12m thru axles. It's paired with a component spec that provides both performance and reliability, starting with a Shimano 105 drivetrain for sure shifting. Flat mount hydraulic disc brakes with internal cable routing maintain a clean look while supplying plenty of control and stopping power even in wet conditions. The 23mm internal width of the WTB ST Light i23 TCS rims improves handling with larger volume tires, and tubeless compatibility means you can adjust the tire pressure depending on the surface conditions. The Donnelly MSO Xplor tires have just the right amount of tread for gravel, while still rolling smoothly on pavement. A Ritchey cockpit features bars that flare out at the drops, which creates a wider arm stance for increased control and stability. 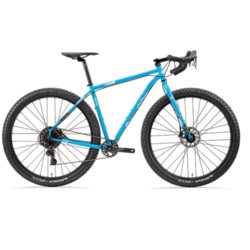 Cinelli Hobootleg Geo
$1,919.99 $2,399.99 20% Off
Born in the great continental crossings, the new GEO comes from the experience of previous Hobo models to guarantee a more precise and performing experience on any type of terrain and in any condition. Hobo GEO was born for the pioneers and for all those who want to test themselves on a car journey sufficiently. Created not to fear slopes and mountain paths, it returns a high performance driving experience and is extremely controllable even when fully loaded. The new Hobo GEO reaches the most mature and T O U R I N G reckless version ever: flared curve, tires up to 29×3.0, “anything you need eyelet” new fork, Sram 1X set up. Three years of tests with the most expert and demanding off-road bike travelers lead to a revisited geometry and added the necessary features for this bike to be a pioneer in the explosive sector of self sufficiency travel. 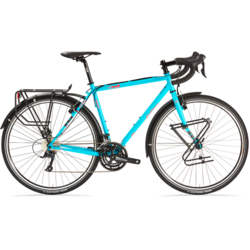 Cinelli Hobootleg Easy Travel
$1,189.99 - $1,399.99 $1,399.99 Up to 15% Off
Here is the Hobo for those who prefer STI levers to ‘bar end’ and lighter racks for an easy travel. Same 3x crankset (48/36/26) and same Shimano 9 speed cassette (11-34). Alex wheels with reflective details and Michelin Protek Cross BR 700x35C tires. From the use of double-butted Columbus tubes, to its electrophoretic paint job, to its full length external cable routing, for an easier maintenance to its custom ovalized Cinelli handlebar, to its travel geometry, there is no detail of this bike which has not been obsessively tuned, tested, retuned and perfected to make a bike ready to travel anywhere. 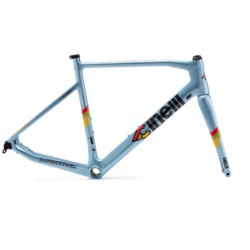 Cinelli Superstar Disc Frameset
$1,343.99 $1,679.99 20% Off
The Superstar is Cinelli’s cutting-edge carbon fiber re-interpretation of the mythical Italian stage-racing bicycle that is the brand’s heritage and DNA. Unlike other brands who each year offer bicycles with ever increasingly narrow scope of use, Cinelli, when developing the Superstar, obsessed over the way in which the inherent qualities of carbon fiber and its manufacturing processes could be employed to produce an aggressively contemporary version of the legendary versatility of the Italian Grand Tour ride quality i.e. the intelligent balance of low-weight, aggressive handling over highly varied terrain and long-distance riding comfort. To this end, the Superstar not only adheres to a traditional Italian racing geometry (72,5° headtube, 415mm chainstays), but is also characterized by: the shaping of the forms of the frame to allow the greatest precision and customization of the lay-up of different grades of carbon in the construction process. Note, for example, how the tangent lines joining the top and down tubes to the head tube allow for the carbon fiber to remain completely straight thus offering the maximal weight-to-stiffness ratio. The proprietary bowed top tube, whose form allows for a controlled deformation of the top tube headtube when the frame is subject to strong vertical or horizontal forces such as potholes, poorly surface roads etc. The controlled deformation results above all in a head tube that remains 8% more parallel to its original position, allowing for greater control and predictability of handling when riding in rough conditions. The use of both external and – unlike the majority of other models on the market – internal PU moulds during the carbon curing process, allowing for greater compression of the fibers as well as minimizing the amount of resin needed and greatly increasing long-term reliability of the frame. After spending the last 13 years in the professional peloton riding for teams such as Quick Step and Team Sky, in 2017 Davide Viganò raced and won the Red Hook Criterium series with Team Cinelli Chrome. In additional to select fixed gear criteriums, Davide raced a calendar of prestigious North American road criteriums including Speed Week and Tulsa Tough. He raced these criteriums alone, without the luxury of team mate or mechanic, often finishing on the podium. Racing without support, on varied highly varied terrain, he chose to travel with the Cinelli Superstar, a carbon designed with ultimate emphasis on versatility and secure handling. At the heart of the confident and predictable handling of the Superstar is its proprietary bowed top tube which allows the frame to respond in a far more controlled way than traditional carbon fiber frames to the deformations produced by road obstacles such as potholes or cobblestones. The Superstar’s bowed top tube allows for the bike’s headtube and fork to remain noticeably more (8%) parallel to their original position, allowing the rider to more easily control the bike in difficult terrain. The controlled deformation of the top tube also reduces the loss of surface contact at the rear wheel, further improving the rider’s ability to control the bike. 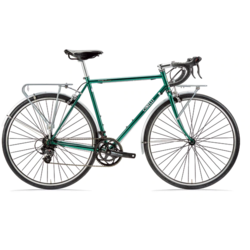 Cinelli Gazzetta Della Strata
$1,019.99 $1,199.99 15% Off
Gazzetta della Strada is the urban reinterpretation of the Cinelli house of the classic French randonneur bicycle . Designed for the daily challenges of the city, from bad weather to transporting things, it is perfectly at home on weekend travel. Like the classic randonneur , the Gazzetta della Strada has therefore a comfortable road bike geometry, with great attention to comfortable and safe posture without sacrificing the feeling of speed. The bicycle mounts a traditional Brooks B-17 saddle, full mudguards, front and rear luggage racks, double brakes and compact crankset to face the climbs in agility.
Page 1 of 1